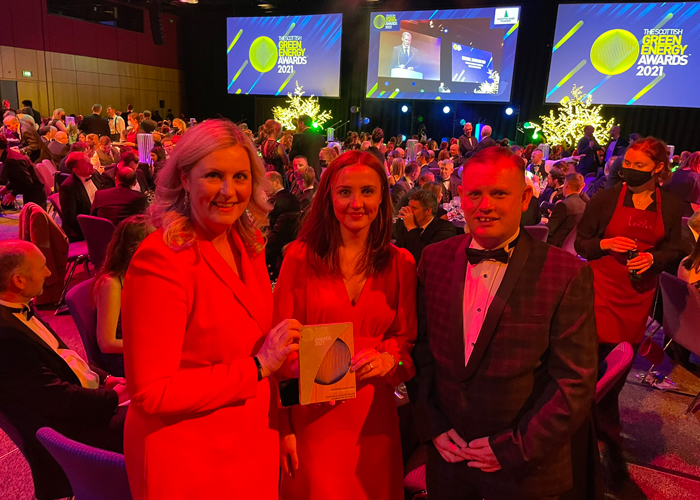 DUMFRIES AND GALLOWAY College has won the Outstanding Project Award at the Scottish Green Energy Awards 2021, completing a hat-trick of awards recognising its commitment to environmentalism.

The South of Scotland college saw off tough competition from its competitors to wow the judges and scoop the most recent prestigious prize.

Previously, Dumfries and Galloway College took home two awards at the Green Gown Awards, winning in both the Campus of the Future and Benefiting Society (Small Institution) categories.

This newest award recognises the college’s industry-leading Green Energy Centre which sits at the centre of its ambitious plans to reach net zero by 2030 and brings together its on-going work in green technology, skills, and learning.

Hosted by Scottish Renewables and supported by stakeholders from across the energy sector, the Scottish Green Energy Awards celebrate the achievements of individuals and institutions that go towards making Scotland a cleaner, greener, and more energy efficient country.

Award-winning comedian Jo Caulfield presented the awards during an awards dinner at Edinburgh’s EICC which was held in compliance with all COVID-19 measures.

Dumfries and Galloway College is delighted to have the hard work of its college community recognised at these important awards and dedicates itself to continuing to promote the environmental agenda in the South of Scotland and across the country.

“Green energy, and the skills and technology that support it, is fundamental to everything we do at Dumfries and Galloway College and so this award is incredibly important to us.

“Our Green Energy Centre is one the most exciting and innovative developments in the green economy in Scotland and to have it recognised in this way is a proud moment for our entire college community.

“To be able to add this award to those we won at the Green Gown Awards further shows that we are on the right path.

“I would like to thank Scottish Renewables and everyone involved in holding the Scottish Green Energy Awards for everything they do and I look forward to working with them further in the future.”