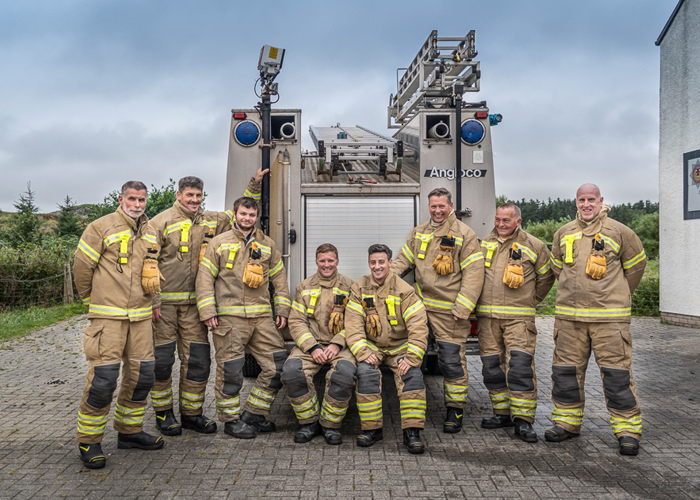 CHEF Graham Griffiths has worked at the Coll Hotel on the island of Coll for ten years. As well as serving his local community and visitors with meals from the hotel’s kitchen, he’s also looking after their safety. This year he joined the ranks of the Scottish Fire and Rescue Service (SFRS) as a volunteer on call firefighter.

Volunteer on call firefighters carry a pager and perform firefighting, rescue and other activities to resolve incidents, as well as delivering community safety programmes.

Graham felt motivated to apply to SFRS after seeing the devastating effects of a house fire on the island in 2021.

Graham said: “I feel I am one of the younger members of the community and felt I could contribute. I had thought about it for a while, I spoke to my employers, and they were full of encouragement. We had a chat about how we could make it work in the event of a call out.”

After Graham was successful in his application to SFRS he completed a two week intensive course earlier this year.

He said: “SFRS sent over three trainers and the course was pretty intensive. People would pay to get on that course, it was really informative. With the trainers coming over from the mainland, it feels like there is a lot of investment being put into the volunteer on call fire service on the island.

“I’ve also been going to the local station on Monday nights for training and I’ll hopefully get booked into a BA (breathing apparatus) course next year. I feel there is still a lot to learn and to take in. It’s a great experience.”

Graham, 38, is originally from Glasgow and used to holiday on the island when he was a child and when he was a student he worked at the hotel. His previous jobs have included Glasgow’s House for an Art Lover. Julie Oliphant, owner of the Coll Hotel asked Graham to join them as their chef.

As an employer, Julie is supportive of Graham’s volunteer on call firefighter role.

Julie said: “On Coll, it’s more than just work, it’s about investing in the community. We want to keep the younger ones here and staff retention in the hospitality industry is a major issue. Once we get great staff it is vital we hold on to them. Graham has been our chef for 10 years and it’s quite unique to keep a chef that long. Our staff need to have a life out-with work and it makes complete sense if we have staff becoming on call firefighters, we encourage it and we are thrilled Graham got into the fire service.”

The hotel has been in the Oliphant family since 1963. When the business was facing bankruptcy in 1984, Julie and husband Kevin left their then Sussex home to return to the island to run the hotel. They have invested and extended the business and with daughter Laura now as co-owner, they have won a series of hospitality awards.

When they returned to the island, the Oliphants also gifted the fire service an area of land to build a new fire station. Kevin, who was raised on Coll, also became an on call volunteer firefighter and served for 28 years, for most of those years he was leader of the unit.

Julie said: “The fire service was just a hut and brushes when we came here and it was on our land, so we gifted them a bigger piece of land when the opportunity came up to build a proper fire station.”

To thank the hotel for their support for the SFRS, the Oliphants have been awarded an SFRS Employer Recognition Award which was presented by the area’s Local Senior Officer, Joe McKay.

He said: “On call firefighters display a dedication to help their communities and to help keep people safe. In Scotland’s remote areas and islands, on call firefighters, such as Graham and the crew at Coll Fire Station play a vital role.

“However, we should also remember the role employers play when they support the SFRS and our on call firefighters – this action also helps to protect communities. Employers like the Coll Hotel, who for decades have offered their support and recognised that dedication displayed by on call firefighters. I am delighted to present this plaque to the owners of the Coll Hotel to thank them for their years of service and support.”

Julie said: “It is vital that we have on call firefighters on the island to help to keep our community safe and we will always support their work in any way we can. We are very proud to be supporters of the SFRS and to display this award on our hotel.”

Volunteer on call firefighters help their communities while also learning many transferable skills.

To read more about becoming a volunteer on call firefighter:

Employers can read more about supporting their staff to become on call firefighters: