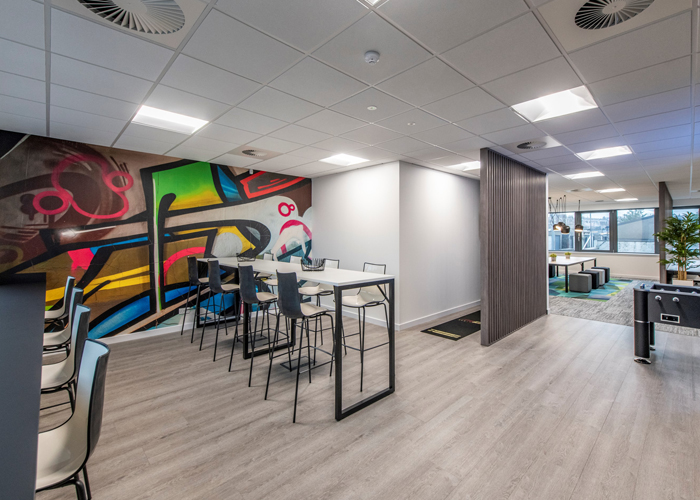 Esson Properties’ plug and play offering at Blenheim Gate in Aberdeen which has break-out spaces, lounges and sit-down ‘Zoom areas

A SIGNIFICANT majority of businesses (68%) expect to be promoting a more regular return to the office by the middle of this year, according to the latest EMEA Occupier Sentiment Survey from global real estate advisor CBRE.

Nearly a quarter of those surveyed (23%) said the process is already underway, with 45% focusing on the remainder of H1 as the return period. The survey also pointed to some notable sector differences, with nearly 80% of financial companies aiming for a more regular return by mid-year.  By contrast, over a third of technology companies are allowing the process to take its own course without specifying a timeframe.

A clear majority (72%) of companies say that they are moving towards a hybrid workplace model in which employees have a measure of choice within the framework of company guidance.  Not only is this appreciably higher than last year (55%), but most say that there is strong C-suite endorsement of this position and nearly two-thirds (65%) say that sentiment has actually strengthened in this direction during the pandemic.

Angela Lowe, Senior Director based in CBRE’s Edinburgh office, commented: “Companies must now decide how much personal autonomy to allow as well as the balance between office and home. Over half of companies aspire to an equal mix of office and remote-based work – up from 29% last year, while 38% think their workers will be at the office for three or more days per week.  It is encouraging that we are already seeing car parks filling up and amenities being utilised in locations like Edinburgh Park as people return to the office.”

Regardless of location, a growing number of companies also expect their portfolios to expand.  A year ago, a third of companies were expecting to expand physically over the next three years.  This has now risen to over 40% overall, with the figure rising to 60% in the technology sector.

Angela Lowe continued: “Portfolio locations are also coming more into focus, with over a quarter of businesses considering relocating some functions to lower cost regions or cities.  Cost isn’t the only factor at play though, with many businesses looking at growth.  There are a number of tech and financial service companies focusing their European growth in Edinburgh just now.”

Market changes have also led to increased popularity for the flex office market. The proportion of companies for whom flex space represents less than 10% of their portfolio has halved from 86% now to an expected 41% in two years’ time.

Alistair Urquhart, Director based in CBRE’s Glasgow office, said: “We are seeing occupiers using their lease events as an opportunity to review their real estate portfolios. Often the increase in flex has been driven by a means of entering new markets and occupiers using this model for smaller office locations or where flexibility is desired. There is strong demand for not just serviced offices but also secondhand spaces with good quality fit outs. The desire of occupiers to expand into new markets is also consistent with flex office providers looking to do the same.”

Nearly 90% of those questioned indicated that they would be making changes to their real estate strategy as a result of the pandemic. Linked to this, the survey also indicated the increasing importance of workplace strategy compared with the same period a year ago. Companies are increasingly looking to increase collaborative areas – up from 36% to 63% and are revisiting design standards (up from 22% to 50%).  Enhancing or increasing workplace amenities (up from 9% to 36%) and altering layouts to provide more open space have also increased in popularity. In response to the demand, CBRE’s client Esson Properties incorporated break-out spaces, lounges and sit-down ‘Zoom areas’ when creating its plug and play offering at Blenheim Gate in Aberdeen. The survey also indicated a heightened desire for an increased emphasis on health and wellness, with 41% of business citing this as being important.

Amy Tyler, Associate Director based in CBRE’s Aberdeen office, added: “Office occupiers face a complex matrix of issues as they adjust to and indeed shape a new reality. After a period of huge uncertainty, there is more clarity emerging over the direction of future real estate strategy, with only a small minority of companies reporting no change in their real estate strategies.

“The acceptance, or endorsement of the reality of hybrid working patterns has gained traction, with employee time being divided more equally between home and office. Sometimes though this does just amount to vague statements of intent and there is undoubtedly a clear need for strong senior-level messaging and change management to guide employees through this phase.”