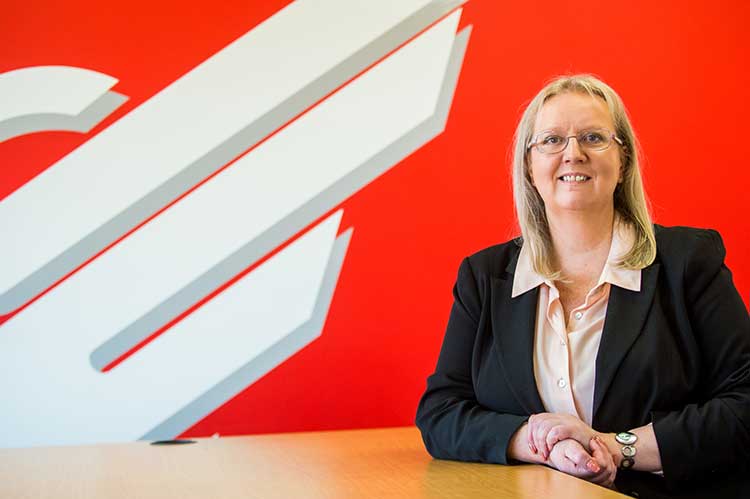 Leading the way for women in the flourishing industry, Fiona Deas will take full charge at Eagle Couriers following the retirement of her business partner, Jerry Stewart.

Having been with the company for over 22 years, Fiona’s significant achievement comes less than a year after landing the title of ‘Business Woman of the Year’ at The Scottish Women’s Awards 2018.

Jerry stepped down from his role after more than 30 years with the Bathgate-headquartered firm, 13 of which were served as Fiona’s co-director following a management buy-out (MBO) in 2006.

His departure comes after the business’ recent growth, spurred by acquisitions of baggage repatriation firm THS Couriers in 2017 and Surrey-based Wey Group International in 2018, boosting the firm by expanding south of the border.

Fiona said: “I am proud to take over the reins at Eagle Couriers and continue to lead the company to more growth. I’ve worked in a lot of different roles over the years, but I wouldn’t be doing what I do now if I wasn’t passionate about it.

“The constant transformation of the courier industry is hugely exciting and it’s gratifying to know that you’re respected and trusted as a female leader in a male-dominated sector.

“I’m thrilled to see what the next few years will bring and I want to set an example for other women who aspire to break into the world of transport.”

Joining Eagle Couriers at the age of 36 as a manager in the Glasgow depot, Jerry rose up the ranks, eventually playing an integral part in the MBO.

Jerry, now 68, said: “When I started in 1988, I would have never imagined myself at Eagle Couriers 30 years on, spearheading the growth of the company alongside Fiona.

“I have seen the transport industry change a great deal since the early boom years and I’ve developed a true passion for it.

“It has been a pleasure to help the firm hit so many significant milestones over the years, building robust credentials and reputation amongst Scotland and the rest of UK’s transport industry and playing a key role in all types of business.

“Our ethos of service has always been strong. Expanding the team and training a fleet of drivers and operators committed to our values and customer service excellence has definitely been a highlight of the job.

“I have no doubt that Eagle Couriers will continue to boost its growth and expand operations. The company is left in remarkably capable hands with Fiona.

“We have proven time and time again that Eagle can adapt to tough changes and challenging conditions in the market, always building up in a sustainable way.

“It will be gratifying to continue watching the company’s future successes from the sidelines. It’s been an amazing journey.”

The continued growth of the Scottish firm has resulted in a combined fleet of more than 185 vehicles throughout the country so far, further establishing it as a sector leader.

Before joining Eagle Couriers back in 1997 as Finance Manager, Fiona worked at an accountancy practice, in manufacturing and in health care.  After the company’s MBO, she became a director and shareholder.

Fiona added: “Jerry is an exemplary figure in the UK’s transport industry with a great deal of hands-on expertise.

“He’s been a pillar of the company and played an integral part in its evolution into a modern, flourishing business and we wish him well in his retirement.”