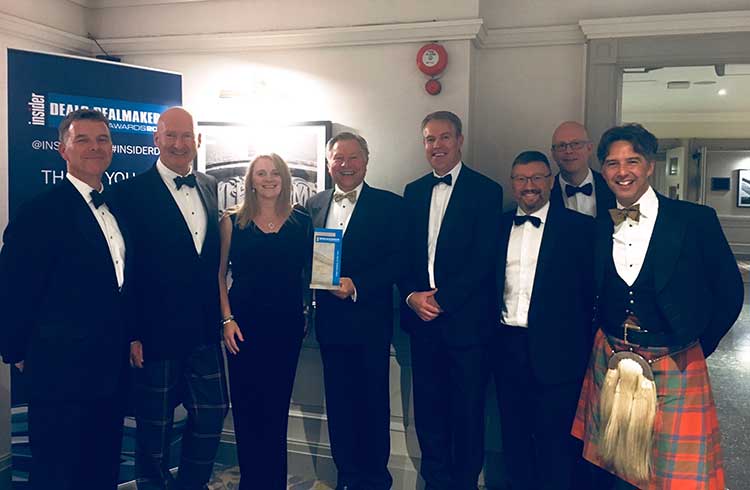 The firm was among the winners announced at a black tie award ceremony hosted at the Doubletree Hilton Hotel in Glasgow.

The Deals and Dealmakers awards celebrate excellence among those who are at the forefront of Scotland’s deals transactions.

Highlights for Brodies over the past twelve months include advising Episerver in its $1.16 billion sale to global PE firm Insight Venture Partners; developing a ground-breaking contractual structure for Premier Oil in relation to the North Sea’s Tolmount field; and advising Orbital Marine Power (Orkney) plc on its offer of green finance bonds to the public via ethical investment platform, Abundance investments, raising £7 million – the platform’s largest to date.

The judges praised Brodies for its “impressive range of deals that were complex and innovative” and described the firm as “gold standard”. They also singled out the Premier Oil deal for setting “a world precedent doing regulatory work that had never been done before.”

Commenting on the award win last night, Shuna Stirling, Head of Corporate and Commercial, said: “The past 12 months has seen our clients push ahead with their own agendas and we take confidence from that resolute attitude, which has enabled us to work on exciting deals that break new ground and challenge our way of thinking.

“We are delighted to be recognised as Legal Advisor of the Year at this year’s Deals and Dealmakers Awards. I would like to thank our clients for their continued support and trust in Brodies to help them deliver on their ambitions; and our colleagues for responding to those ambitions with insightful advice, creating bespoke, new legal possibilities.”