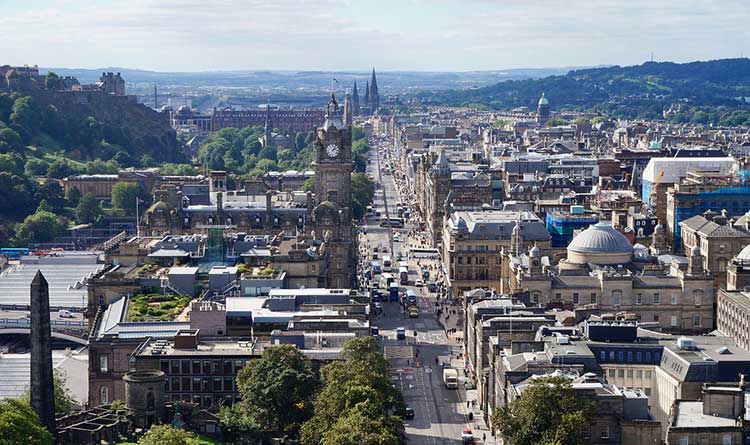 The UK’s top cities for business have been announced by Management Today magazine featuring Edinburgh in the number 2 spot, Glasgow at number 6 with Aberdeen trailing in 19th place.

Manchester took the top spot followed by Bristol in second place and Leeds in third. The report excluded London.

The “21 Best Towns and Cities in Britain for Business” rates major urban centres, excluding London, on their appeal as places to run and grow talent-hungry, knowledge-based companies.

The UK’s 63 biggest towns and cities were assessed on metrics including productivity, the depth of the talent pool, the strength of innovation, the scale of the private sector ecosystem and the rate of growth. These results were collated and carefully weighted to produce a shortlist of 21, which was then ranked by a panel of expert judges with reference to the data and submissions from the cities themselves.

The Report said about Edinburgh –

“A world-class academic offering and bold data-driven agenda lie at the heart of modern Edinburgh’s regional economy. The city has grown 12.5 per cent in the past ten years, excels in data science, cyber security, robotics and stem cell research, and enjoys one of the highest rates of successful business start-ups in the UK.

The workforce is highly skilled – almost half (42 per cent) of all graduates from the city’s four universities choose to stay after graduation – and the city benefits from an enviable quality of life. It was named the best city to live in the world in the Arcadis 2018 Sustainability Cities Index, as well as the UK’s most walkable city in 2017 (55 per cent of residents use the bus, cycle or walk as their main mode of travel).

The Data-Driven Innovation (DDI) initiative is part of the £1.3bn Edinburgh and South East Scotland City Region Deal that aims to train 100,000 people to create the data capital of Europe.”

“The Glasgow city region can claim to be the economic powerhouse of Scotland. Generating over £43.5 billion Gross Value Added (GVA) in 2018, it is home to more than a third of all Scottish jobs and the fastest growing major city economy in the UK.

It has a diverse business and industry base and has identified the growth of SMEs in particular to be a key contributing factor in achieving the aim outlined in the Economic Strategy 2016-2013 of having the most productive urban economy in the UK by 2023. To support this it hopes to create a collaborative – and unrivalled – network of business support, engaging the public, private and education sectors.

The council is working with suppliers to help SMEs access specialist support. This will include an unranked framework of suppliers and a referral programme to encourage collaboration.”

“Perhaps best known as an oil and gas hub, Aberdeen is at the forefront of the global energy transition to a lower carbon world. It is also an important centre for life sciences, with world-leading health research, and home to many global food and drink brands.

Although its maritime heritage remains central (ongoing investments include £350m at Aberdeen Harbour and £50m at Peterhead Port), the city has moved seamlessly into scientific, engineering, digital and low carbon specialisms. The £826m City Region Deal signed in 2016 is a key example of stakeholders in the region working collaboratively on diversifying and securing the regional economy, while £8bn+ of public and private infrastructure investment is due to be delivered before 2030.

Centre for Cities data shows Aberdeen ranked fourth in the UK in 2017 for the percentage of the working age population with higher level qualifications.”

Adam Gale, editor, Management Today, said: “London rightly has a world-class reputation, but that doesn’t mean the rest of the country should live in its shadow. There are great business hubs across the UK that deserve recognition.

“There was a lively discussion over the winner in particular, but Manchester deserves the top spot. What set it apart was the concerted effort of its employers and local authorities to make Manchester as successful in the 21st Century as it was in the 19th.”