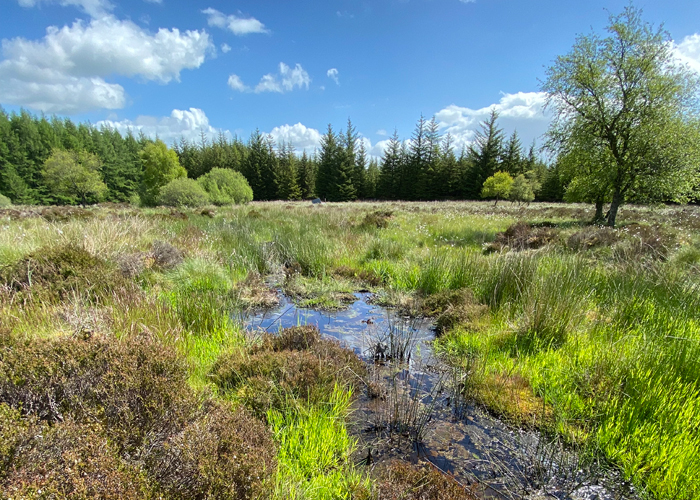 BEAM Suntory, a world leader in premium spirits, today announces a new partnership with the Royal Society for the Protection of Birds (RSPB) for the restoration of peatland in Scotland, promoting carbon sequestration and protecting invaluable biodiversity. This marks the start of the second phase of the Peatland Water Sanctuary™ (PWS™) initiative, a joint $4 million conservation project launched in 2021 by Beam Suntory and its parent company, Suntory Holdings.

Beam Suntory will contribute more than £400,000 to restore and regenerate approximately 160 hectares of peatland at the Airds Moss reserve in East Ayrshire, Scotland which is owned by RSPB Scotland. Restoration will take place over four years and the partners will provide annual updates on the impact of the project.

The first year will involve extensive fieldwork; completing surveys and analysis to design a restoration plan. Physical work is expected for winter 2023, at which point work will be carried out to re-establish original peatland vegetation to promote the regeneration of peat.

This restoration builds on the success of the first stage of the PWS™ initiative, which began with work to restore and conserve peatland near the Ardmore distillery in November 2021. Since then, approximately 13 hectares of peatland have been successfully restored in partnership with the James Hutton Institute and Forestry and Land Scotland.  An expansion of the Ardmore PWS™ project is currently being scoped.

Beam Suntory is also keen to improve education and awareness about the importance of peat and biodiversity and recently ran a peatland restoration training event at its Laphroaig Distillery on Islay. The company is planning to replicate the event at further sites across Scotland.

Alistair Longwell, Head of Distillation & Environment, Beam Suntory, commented: “We’re now a year in since launching our PWS™ initiative and it’s rewarding to be using our accumulating knowledge and expertise to make a significant impact to Scotland’s ecosystems. Working across the Airds Moss Reserve in partnership with RSPB Scotland represents a great step forward in our goal to restore 1,300 hectares of peatland by 2030.”

Anne McCall, Director for RSPB Scotland added: “We are delighted to be working in partnership with Beam Suntory to restore peatland at our Airds Moss nature reserve. Peatlands are incredibly special and fragile habitats, with an enormous importance in the fight against climate change. RSPB Scotland Airds Moss is of international importance for its blanket bog habitat and supports some wonderful species, including hen harrier, golden plover, fantastic carnivorous sundews and large heath butterfly.”

Robbie Millar, Managing Director Scotch & Irish, Beam Suntory, added: “As the home of our iconic Scotch whiskies including Bowmore, Laphroaig and Auchentoshan, we are committed to helping to build a prosperous future for Scotland. This means working both within and beyond our own distillery sites, partnering with local communities and organizations like RSPB Scotland to drive initiatives like Peatland Water Sanctuary™ and set higher targets to protect our natural environments.”

Harumichi Seta, General Manager, Sustainability Management Division, Suntory Holdings, commented: “A year ago, we launched the PWS™ initiative to contribute to sustaining healthy peatlands essential to the production of quality Scotch whisky and to protect Scotland’s ecosystems. Today, we are excited to see tangible progress and expansion of our PWS™initiative – we are determined to fulfil our responsibility as a company that relies on the blessings of nature and water and continue our journey to give back more peat than we use in the production of our whiskies.”

Alan Brown, Member of Parliament for Kilmarnock, said: “Peatlands and heather are what makes Scotland’s landscape so special, particularly within my constituency of Kilmarnock and Loudoun where the restoration and protection of this land is taking place. The environmental benefits of peatland as a carbon store are well known so this helps combat climate change. It’s great to see Beam Suntory spearhead this work within our community alongside RSPB Scotland.”

The PWS™ initiative aligns with the Suntory Group Sustainability Vision and Beam Suntory’s ambitious Proof Positive sustainability strategy, as well as the Scotch Whisky Association’s environmental commitments. In addition to the long-term positive impact of peatland and watershed restoration and conservation on water retention and quality, the work will also support carbon sequestration and biodiversity in the local area, helping to maintain and protect the important role of peatland ecosystems in Scotland’s natural environment.