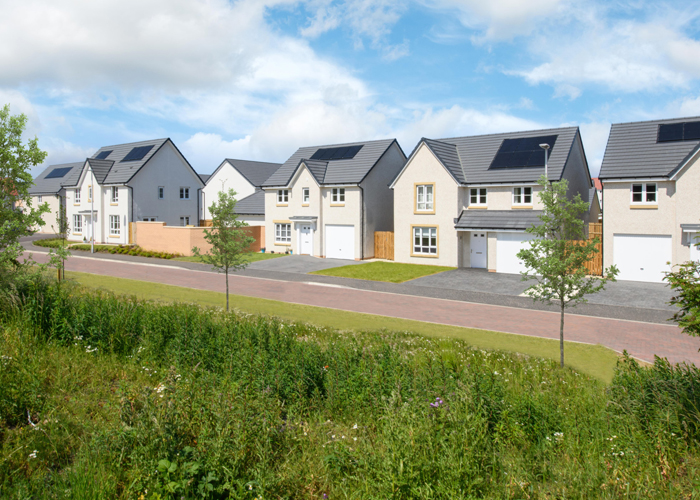 BARRATT Developments Scotland is leading the way in delivering eco-friendly homes to buyers in Scotland, and is well on its way to meeting top energy efficiency standards set out by the Scottish Government.

Latest research by the UK’s largest housebuilder, which owns Barratt and David Wilson homes, shows that all of Barratt’s new homes (100 per cent) are built to a minimum EPC rating of B or above.

This puts Barratt ahead of schedule in meeting the Scottish Government’s Heat in Buildings Strategy, which sets housebuilders an ambitious target to achieve a good standard of energy efficiency, and by 2033 to meet at least an EPC band C standard.

All new homes are given an EPC rating between A and G, with A being the most energy efficient in terms of likely fuel costs and carbon dioxide emissions, but there are currently no legal requirements on a minimum EPC rating for new build homes.

The housebuilder has also announced a new partnership with Halifax bank that now offers green mortgages to environmentally-minded buyers, which means that those purchasing Barratt’s energy-efficient homes could be offered a larger loan with lower interest rates as a consequence of their smaller anticipated energy bills.

Doug McLeod, regional managing director for Barratt Developments in Scotland, believes newly-built properties’ eco credentials could soon be the ultimate selling point for homeowners, in particular first-time buyers struggling to get on the property market.

He said: “A new generation of homebuyers could find new homes with green credentials as their only affordable option. We know that energy spending can be a major household outgoing and a big part of the consideration when buying a new home. Environmental considerations are also becoming increasingly important for home buyers as we search for ways to create a net zero carbon emission society, and at Barratt Homes we are committed to playing our part by enabling our customers to make greener choices when it comes to buying a new house.

“The affordability of some of the green mortgage deals, combined with the energy efficiency and cheaper running costs of new build homes, are already leading to more and more first-time buyers taking the new build route into home ownership.”

It’s not the first time Barratt has taken a lead for the housebuilding industry. Last month, Barratt launched a unique flagship zero carbon home concept called the Z House that will be occupied and monitored to assess its performance. And last year, the company announced its commitment to reduce direct carbon emissions by 29 per cent by 2025 and to achieve net zero greenhouse gas emissions in its own operations by 2040.

The winner of Sustainable House Builder of the Year, Barratt will also cut its indirect carbon emissions (those coming from its homes and from its supply chain) by 24 per cent per square metre by 2030. Building lower carbon homes and using more sustainable materials will be a key part of achieving this target.

It will also deliver new zero carbon standard house types from 2030 and ensure that 100 per cent of the electricity that it purchases will be renewable by 2025.

As the country’s largest housebuilder, Doug McLeod, says they have a major role to play in looking after the environment in a sustainable way for future generations, whilst also delivering the homes this country urgently needs.

All new Barratt homes are up to 57 per cent cheaper to run, meaning homeowners could save up to £1,410 on their bills each year compared to an updated Victorian equivalent property. They come with features such as modern double glazing fitted with argon gas that is designed to capture the sunlight and flood rooms with light, as well as smart technologies which include solar panels, highly efficient boilers, heat recovery, and increased insulation in walls, floors and roofs to make sure that draughts won’t cause winter chills.

David Balfour, account director at New Homes Mortgage Scotland, said: “We are increasingly hearing from our customers that they’re interested in purchasing an energy efficient home as they prioritise environmentally-friendly lifestyles. Green mortgages are most commonly available on new build homes where homebuyers could benefit from cheaper rates and cashback incentives. Eligibility for many of the green mortgage deals is linked to the property’s EPC rating – for example, it might need to be A or B. A large proportion of the UK’s housing stock is old. This is one reason why more and more homeowners and first-time buyers are choosing new build properties that are sold with excellent EPC ratings of B and above.”

Reducing carbon emissions and having the top energy efficiency ratings in new build homes isn’t the only way Barratt is helping to save the planet. They are also making wildlife-friendly places to live through their partnership with RSPB, the country’s largest nature conservation charity.

By 2023 Barratt will further prioritise wildlife on all new developments by creating dedicated spaces for local biodiversity conservation, installing a range of wildlife-friendly features including hedgehog hideaways and swift nesting sites. Beyond 2023 their goal is to have at least 10 per cent more wildlife habitats in and around developments, delivering a clear biodiversity net gain across the country.