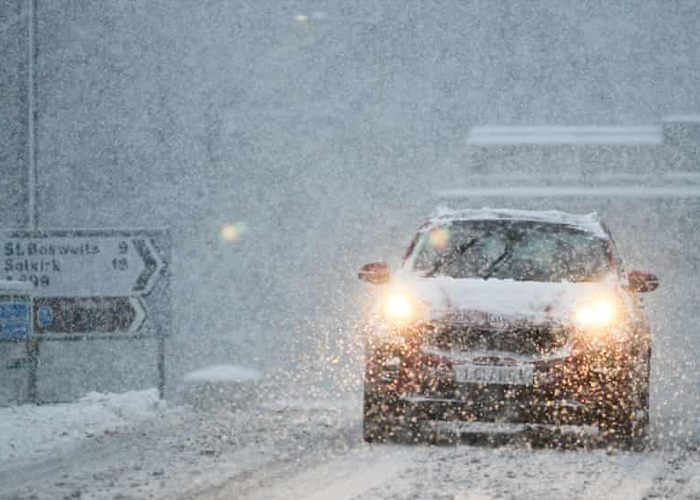 WITH STORM BARRA set to arrive in the UK, bookmaker William Hill’s odds on a White Christmas have been tightened once again, and have sunk to their lowest collective level since the last widespread festive whiteout in 2010.

Temperatures are set to plummet to freezing with heavy snow forecast for northern England and Scotland in the coming day.

The MET office has issued a yellow weather warning for heavy snow and wind, due to Storm Barra, just as Scotland and parts of northern England recover from Storm Arwen.

With thousands of homes across the affected regions only just having had their power reconnected, a band of rain is expected to turn to snow through Tuesday, moving northwards across central and northern England into Scotland. Forecasters are suggesting it could see up to 2-5cm of snow deposited locally, but up to 10cm in the Southern Uplands and Highlands.

A ministerial meeting of the Scottish Government’s Resilience Room (SGoRR), chaired by Deputy First Minister John Swinney, was held earlier today to ensure preparations and appropriate measures are in place.

Mr Swinney said: “In preparation for Storm Barra, I met resilience partners to oversee efforts and ensure every possible resource is deployed and continues to stand by to coordinate support.”

“I want to assure the public that we have strong and robust arrangements in place to manage and address weather-related resilience issues at a national, regional and local level. In the aftermath of Storm Arwen, we will review the preparations and response to ensure we learn from this most exceptional storm.”

Heavy snow is expected across the central belt of Scotland, Strathclyde, Perthshire and the Highlands, and it appears snow on the ground has been the catalyst for big interest in snowfall on December 25, with Edinburgh and Glasgow now available at 3-1 with William Hill.

2010 featured the coldest December since the MET Office records began in 1910. There was snow on the ground at 83% of weather stations on December 25 (the highest amount ever recorded), while snow or sleet fell at 19% of stations.

As well as the record low temperatures, heavy snowfall brought with it power cuts, travel chaos and school closures, with the UK remaining under the Arctic air right up until Boxing Day.

The popular pastime of betting on a white Christmas was in fact instituted by William Hill, and traditionally required a single snowflake to fall on the MET Office operations centre in London. Nowadays, all that is needed to declare a White Christmas is the observation of a single snowflake falling in the 24 hours of December 25, at one of 13 major UK airports.

Transport Scotland, utility companies and local resilience partners have contingency plans in place in preparation for any disruption, and will continue to share up to date advice and information with the public.

William Hill spokesperson Rupert Adams said: “With the arrival of this latest icy blast, the wider narrative looks as though it could well play out as is anticipated, meaning an increased likelihood of a festive sprinkling on December 25.”