As Scottish shopworkers speak out about violence, threats and abuse, Usdaw urges retail staff not to suffer in silence 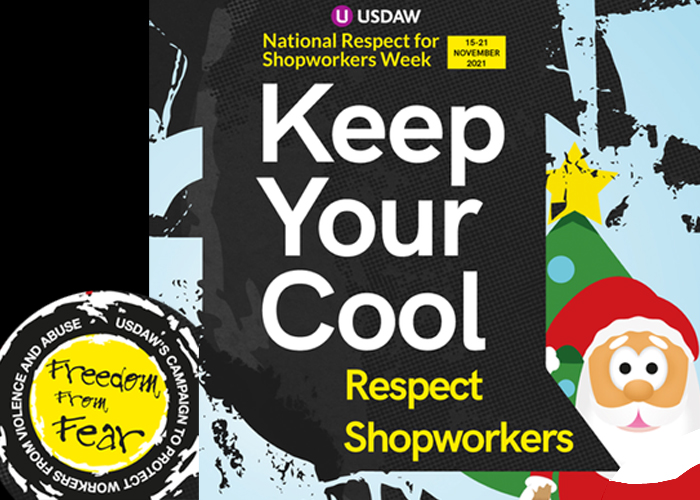 Scottish voices from the frontline: These are some of the comments Scottish shopworkers shared when responding to Usdaw’s survey:

Central Scotland: “Abusive because they are having to wait in a queue or at self-scan to get alcohol or security tags taken off.”- “Have been threatened by violence once I finish work, will wait on me outside and kick my head in.”

Glasgow: “Had a bottle held over my head for my till. Been called a rat and been warned to watch myself walking home at night.” – “Customer tried to punch me, had threats of physical violence and called several demeaning names by customers.”

Highlands and Islands: “Social distancing and mask wearing have resulted in confrontations that have got particularly aggressive.”- “I have had someone throw their shopping at me when I have asked to stay 2m away.”

Lothian: “Lack of respect for requesting social distancing.” – “Multiple times I’ve had stuff thrown at me and once was kicked into a machine.” – “People insulting me or raising their voices when asked to follow basic covid regulations.”

Mid-Scotland and Fife: “We have been verbally abused regarding the safe system in place with regards to reopening our cafe.” – “Mainly shoplifters, threatening behaviour and verbal abuse.”

South Scotland: “Sworn at, spat at, kicked at, punched at, eggs thrown at me.”- “Customer would not social distance, I got an absolute mouthful, said he knew better as he was a doctor.”

West Scotland: “Staff being grabbed by customers, threatened with knives, racially abused and received degrading comments calling us stupid little girls, worthless, and idiots.” – “Customers really think they can say whatever they want to us.”

Paddy Lillis – Usdaw General Secretary says: “It is heart-breaking to hear these testimonies from Scottish shopworkers who deserve far more respect than they receive. Our latest survey results clearly show the scale of the appalling violence, threats and abuse faced by shopworkers.

“It is shocking that 9 in 10 of our members working in retail are suffering abuse from customers, with far too many experiencing threats and violence. So it is extremely worrying that over half are not confident that reporting these issues will make any difference and 7% of those assaulted did not report the incident.

“The new protection of workers law in Scotland is welcome and we continue to campaign for the UK Government to follow MSPs’ lead by extending similar protections to retail staff in England, Wales and Northern Ireland. Retail staff across the UK have a crucial role in our communities and that role must be valued and respected, they deserve the protection of the law.

“It is also clear that the new law needs to be enforced right across Scotland with the police and judiciary prioritising retail crime. Usdaw is urging retail workers across Scotland and employers to help make that happen by recording incidents and reporting them to the police. Our message is ‘report it to sort it’.”