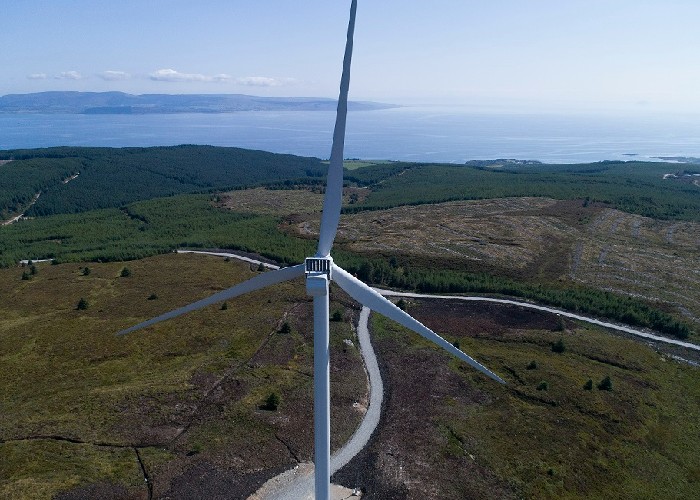 Located on the Kintyre Peninsula in Scotland, Amazon’s wind farm is one of the largest unsubsidised onshore wind projects in the UK and is now delivering clean energy to the grid.

The facility, located on the Kintyre Peninsula in Scotland, is one of the largest unsubsidised onshore wind farms in operation in the UK – meaning it was built without direct government support, and its development did not rely on public funding.

Amazon is purchasing 100% of the power output from this new 50 megawatt (MW) wind farm, which is expected to deliver 168,000 megawatt hours (MWh) of clean energy annually; enough energy to power 46,000 UK homes.

This is the first of four new, large-scale renewable energy projects in the UK enabled by Amazon–all built at no cost to the public. Together, these projects will provide a total capacity of 529 MW of clean energy, supporting both the UK and Scotland in meeting their 2030 renewable energy targets.

“This is the first of our projects to come online in the UK, and is part of a series of investments we are making to power our infrastructure with 100% renewable power by 2025, five years ahead of our original 2030 target.” – Kenneth Matthews, Head of Energy, EMEA, Amazon Web Services

Scotland’s future as a hub for renewables

Amazon is the largest corporate buyer of renewable energy in Europe with announced investments to supply over 2.7 gigawatts (GW) of new electricity production capacity. Once complete, these projects will produce more than 8.4 million megawatt hours (MWh) of renewable energy annually, which is enough to power 2.2 million average European homes for a year.

The energy generated from these projects will power Amazon and AWS data centres, corporate offices, and fulfilment centres across the UK, helping us to serve millions of customers across the globe.

To see more about Amazon’s renewable energy projects around the world, visit our interactive map.

“We are excited that our first Scottish windfarm is now operational. This is the first of four large-scale projects that Amazon has committed to in the UK so far, each of which contribute toward our aim to power operations with 100% renewable energy,”  explains Kenneth Matthews, Head of Energy, EMEA, Amazon Web Services.

“Amazon’s commitment to buy the power generated from these projects enables the developer to finance and build them. It sends a clear message that a project of this size can be delivered without public subsidies.” Kenneth adds.

In the run up to the UN’s Climate Change Conference, COP26, in Glasgow, and as the transition towards renewable energy gathers pace in the UK and across the world, Amazon is demonstrating that corporate procurement can enable renewable energy without needing public subsidies.

Amazon is the largest corporate renewable energy buyer in the world. To date, we have announced 2.7 GW of projects in Europe, including solar and wind projects in France, Germany, Italy, the Netherlands, Spain, Sweden, Finland, Ireland and the UK.

Globally, Amazon has now enabled 234 renewable energy projects, including 87 utility-scale wind and solar projects that have the capacity to generate over 10 GW and deliver more than 27 million MWh of energy annually.

Amazon co-founded The Climate Pledge in 2019 as a commitment to reach net zero carbon emissions by 2040 – ten years ahead of the Paris Climate Agreement.

In 2020, we reached 65% renewable energy across our business, and we are on a path to powering our operations with 100% renewable energy by 2025, five years ahead of our original 2030 target as outlined in The Climate Pledge.

More than 200 organisations, including Sainsbury’s, PepsiCo, Visa and Telefónica, have now signed The Climate Pledge. Collectively these signatories generate over $1.4 trillion in global annual revenues and have more than 5 million employees across 25 industries in 16 countries.