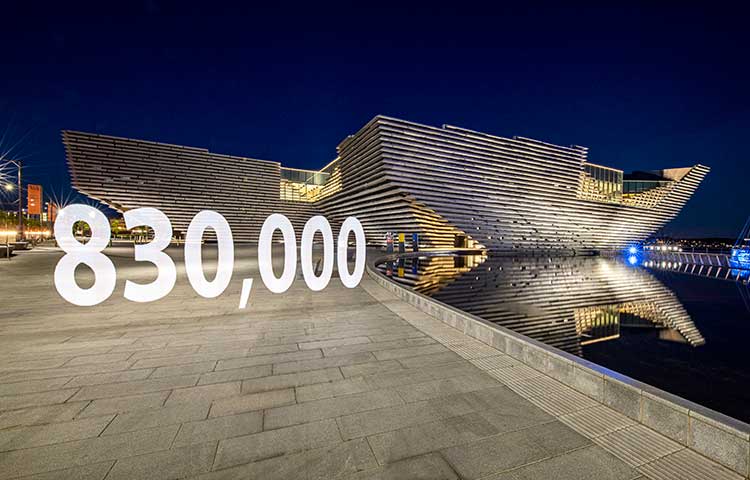 In the last 12 months the museum was visited by the Duke and Duchess of Cambridge for its official opening, made the front cover of TIME Magazine as one of the world’s Greatest Places of 2019, won numerous awards, hosted filming of BBC Antiques Roadshow and even featured in an IRN-BRU Snowman advert.

The museum is estimated to have an economic impact of £23 million across Scotland in its first year, supporting 604 full-time equivalent jobs. V&A Dundee’s creation also allows design exhibitions to be shown in Scotland on a scale never seen before, as its exhibition galleries are the nation’s largest.

Scotland’s first design museum sits at the centre of the Dundee waterfront, an ambitious 30-year, £1 billion regeneration project which began in 2001.

Philip Long, Director of V&A Dundee, said: “The last 12 months have been remarkable and I can hardly believe all that’s been achieved in that time. As well as welcoming hundreds of thousands of visitors and putting on world-class exhibitions championing Scottish and international design, the museum has really become part of the city, and for that I’d like to thank everyone for their support.

“We’re very proud of the contribution we have already made to Dundee and Scotland, and the opportunities we are generating for our nation’s creative talent, such as our current exhibition of work by the brilliant young fashion designer Nicholas Daley. We look forward to welcoming many more visitors to our upcoming major exhibitions Hello, Robot and Mary Quant.”

Independent research commissioned by V&A Dundee estimated the museum’s economic impact in the first year would be £10.3 million in Dundee and £23 million across the whole of Scotland. This was expected to support 178 full-time equivalent jobs in Dundee and 604 across Scotland.

The research, conducted by Ekosgen and Reference Economics, was based on 500,000 visitors in the first year. Work is underway to calculate the actual economic impact, which is now expected to exceed the initial estimates.

Tim Allan, Chair of the Board of V&A Dundee, said: “V&A Dundee has already proven itself to be a major new international attraction, bringing tourists from around the world to Dundee to spend time and money, supporting local businesses. In turn, this is already encouraging new investment and job creation.

“The 30-year waterfront vision outlined in 2001 is clearly ahead of target and I look forward to seeing many more companies investing in Dundee in the next decade.”

Cabinet Secretary for Culture, Tourism and External Affairs Fiona Hyslop said: “The opening of V&A Dundee on the city’s waterfront heralded an exciting new chapter for Dundee and the future of design and innovation across our nation. As Scotland’s first design museum, V&A Dundee celebrates this heritage and our achievements in innovation across the ages, promoting Scotland globally and attracting visitors and investment.

“I congratulate V&A Dundee on its incredible first year of success and I look forward to its future exhibitions and development.”

V&A Dundee has also this week published its Final Evaluation Report, a major 150-page document summarising the key achievements from the start of construction until six months after opening. This was produced as part of the funding agreement with the National Lottery Heritage Fund.

Dundee City Council leader Councillor John Alexander said: “V&A Dundee has helped to boost the international profile of our city, encouraging people to visit this amazing new museum and our other well-established attractions.

“The city’s partners have a long-term vision to create local jobs and opportunities through investment in top-class facilities like V&A Dundee and the latest economic impact figures show this is already paying off, with record-breaking tourism numbers recorded in 2018.

“I am delighted to help our design museum celebrate its first birthday as we look toward to what can be achieved in the years to come.”

Deirdre Robertson, Chief Executive of Dundee Heritage Trust, said: “We have seen significant increases in visitors to Discovery Point since the opening of V&A Dundee last year. Not only paying visitors to the museum, but footfall across our restaurant and gift shop has been considerably higher.

“The approximate increase in paid visits over the period of September 2018 to August 2019 is 44%, and we can only thank our new neighbour, V&A Dundee, for their part in establishing Dundee as a must-visit tourist destination.”