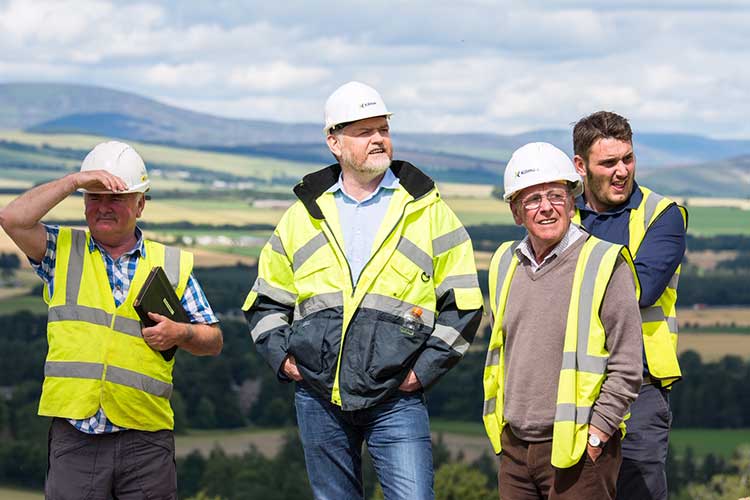 Tayside construction company Kilmac has welcomed a string of new construction contracts worth over £15 million along with striking a multi-million-pound deal with a major Scottish onshore wind developer.

The news is a boost for a company which was forced to announce 10 redundancies late last year after unexpected delays in the award of multiple construction contracts.

But six months on, group director Athole McDonald yesterday confirmed the picture is much brighter, with a record £20 million annual turnover now projected for the Kilmac construction arm and a lucrative joint venture providing a timely cash injection to its development arm.

“There is a real air of positivity within our company following the joint venture agreement we recently struck with Muirhall Energy to deliver the £50 million Glen Ullinish wind farm project on the Isle of Skye,” he said.

“A four-year grid connection delay had tied-up our initial seven-figure investment but now, with partners Muirhall Energy, we are planning to use our mutual strengths and complementary skills sets to deliver the project in 2023.

“This deal guarantees the financial security to deliver a route to market for the Glen Ullinish project in a post-subsidy era and provides stability for the Kilmac group in what are still uncertain times for the wider construction industry.”

He revealed Kilmac, which employs around 100 staff in from its Perth and Dundee offices, has looked beyond its traditional Tayside hunting ground to secure new business opportunities.

“We have picked up strongly after the traditional Christmas seasonal lull,” he said. “We have been moving beyond what had been our traditional geographic area, expanding our horizons and forging new relationships.”

Mr McDonald and fellow director Richard Kilcullen anticipate creating up to 30 new jobs when an £8 million deal to carry out the groundworks  on the new Madras College in St Andrews is signed off in the next few weeks.

“This promises to be the biggest job we have ever handled and will also provide security for the existing workforce in the longer term,” said Mr McDonald.

“We are also delighted to continue our excellent relationship with Dundee City Council as main contractor on the Camperdown Car Park upgrade. We can also confirm our first tie-in with new clients, Maxi for a new primary school in Menstrie and Hadden Construction’s affordable homes development in Crieff’s Pigeon Row.”

Kilmac has been given the green light to commence a £1.5 million groundworks for the Robertson Eastern contract for a new John Clark BMW/Mini franchise at the former Lochee Juniors football ground in Dundee’s Kingscross Road following the successful delivery of the adjacent Jaguar Land Rover project.

“We have also started a major groundworks project for another new client, the Clugston Group, at their exciting £210 million energy from waste plant at Grangemouth,” confirmed Mr McDonald.