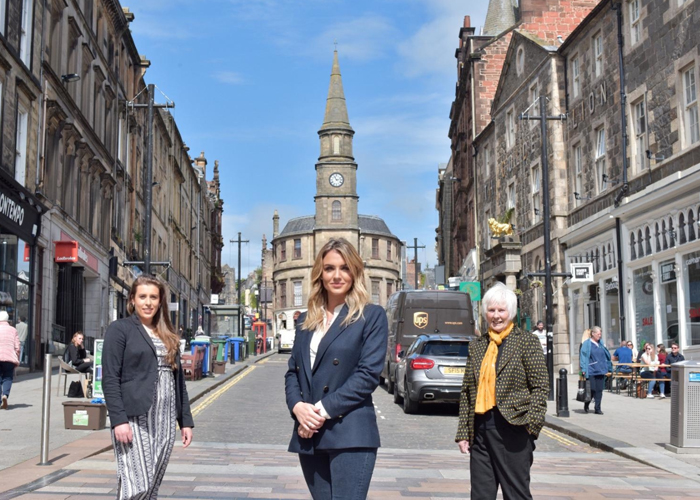 STIRLING’S shopfronts have been given a major facelift thanks to a £100K cash injection from the city’s Business Improvement District.

The team at Go Forth Stirling BID have helped 55 business owners spruce up their premises by allocating grants of up to £5K for improvement work.

A total of £102,353 has been invested in revitalising city centre shop entrances since the launch of the shopfront grant improvement scheme.

Highlights include the transformation of Greek family restaurant Café Aina with a fresh look which includes restored marble signage and a completely new and improved shopfront for the Fone Express store in Upper Craigs.

In the Thistles, Go Forth has contributed to internal ‘wayfinding’ signage which directs shoppers to the many national and independent retailers based in the centre.

Meanwhile, the 17th century Pend (lane) – which leads to The Pend Café Deli & Bistro and Frances Hunter Hair and Beauty – has been renovated with the archway’s original stonework restored and the introduction of new lighting and planters.

Leanne Wilson, who runs the Café, and Allaine Hunter, from the hair salon, are delighted with the results of their joint venture.

Mrs Wilson said: “We’ve had extensive repointing work carried out by stonemasons which has brought back the original brickwork and made the archway look fantastic.”

“We were so pleased to be able to commission this project which wouldn’t have happened without the grant from Go Forth Stirling.”

Mrs Hunter said: “The passageway looks so much more welcoming now and the new look will hopefully catch more people’s attention and lead to increased footfall for our businesses.”

“We’re really happy with the outcome and the help given to us by the BID to achieve the renovation work and will be voting ‘Yes’ in the ballot for a second term.”

Danielle McRorie-Smith, Project Director at Go Forth Stirling, said: “We were impressed with all exciting ideas business owners put forward to improve their shopfronts and are pleased with the work which has been completed so far.”

“Café Aina deserves a special mention given the effect the restoration of the original marble frontage has achieved while the new lighting installed at the Golden Lion makes a big impact on the city by night.”

“The hotel has major historical significance and it has been great to use this grant scheme to showcase the beauty and architectural highlights of the building.”

“Upgrading shopfronts is an important way we can help make a real positive impact on Stirling’s environment and is a major investment in the city centre.”

“Works are also due to begin at the TUI store on Murray Place, which has fallen into disrepair post-pandemic, and we have been able to support Alloa Bedroom Centre with repairs following damage from a neighbouring building.”

“Securing vital grant funding for projects like this would not happen without the BID and we look forward to accessing more funding and carrying out similar initiatives during our second five-year term.”

During the current financial year (since September 2021), Go Forth has allocated £94K to 37 businesses including floral introductions at Frown Docs in Dumbarton Road and Hermann’s Restaurant in Broad Street and the replacement of signage at Specsavers on Murray Place.

Meanwhile, the total outlay currently stands at just over £100K – including £75K from the council’s Place Based Investment Programme – with more transformations planned over the next few months.

Councillor Margaret Brisley, Stirling Council’s Finance and Economy convener, said: “City centre businesses are desperate to bounce back from the past two years and this is a great way to repackage some of our most cherished traders.”

“There’s such a diverse range on offer in the city and the work of the BID helps to articulate that with these bespoke and eye-catching designs.”

“We’re delighted to support their work and hope these efforts go some way to bringing fresh and returning footfall into these businesses.”

Go Forth Stirling BID was set up in 2017 and currently represents more than 600 local businesses with a key objective of delivering projects and services which improve Stirling’s trading environment to benefit businesses, shoppers and visitors.

The company is now balloting business owners in the hope of securing a further five-year term with the results of the re-election bid due to be announced in early July.