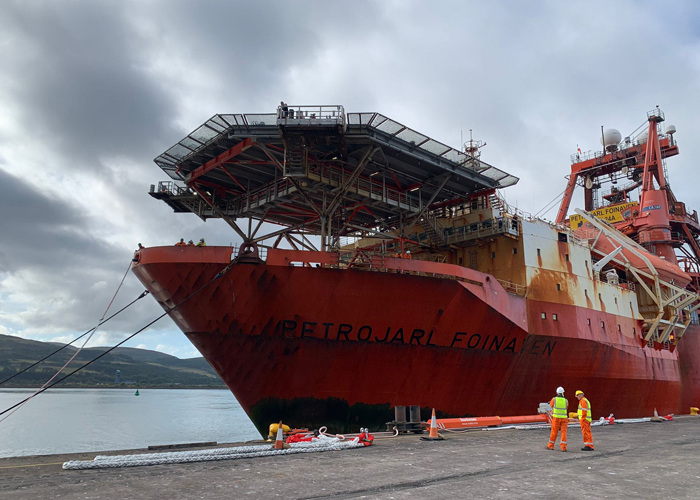 ATLAS Decom (Atlas Marine Decommissioning Services Ltd) has raised calls for UKCS decommissioning projects to remain in the UK amidst plans for a vessel to be relocated hundreds of miles abroad to a yard in Europe, at UK taxpayers’ expense.

Atlas Decom, a leading marine, infrastructure, and vessel decommissioning organisation, have been working on safe disposal options for BP and vessel owner Teekay for the Foinaven FPSO (Floating Production Storage and Offloading vessel), which BP has operated in waters off Scotland for 25 years.

The vessel’s current position is at Hunterston on the Clyde, making the 18 or so nautical miles to Inchgreen Marine Dry Dock (described by Greenpeace as the gold standard for decommissioning) a more sustainable, cost effective and efficient move, as opposed to a costly international relocation of the vessel, with significant carbon footprint to tow the vessel from its current location.

Previous comments by BP in studies undertaken for the Oil & Gas Industry confirmed that a dry dock is almost essential if the project is breaking down an FPSO, in particular the hull. Prior to Atlas Decom’s incorporation, no such dry dock option existed for decommissioning projects in Scotland for vessels of this type. This was a driver in the creation of Atlas Decom and its appointment of prominent experts from across the decommissioning, demolition and oil and gas industries.

Atlas Decom are currently engaging with the Scottish Government to put in place a strategy that they believe will remove the final obstacles in the decision-making process. This will be a positive move for the UK decommissioning industry and will in turn generate jobs within the local area, with no financial contribution required from the Scottish Government.

It is well documented that the treasury is paying out huge sums of money in tax relief for decommissioning projects arising from the UKCS and this project will attract that benefit. The owners and operators of the Foinaven field and its assets have an opportunity to realise that the end-of-life assets remain in the UK and contribute to the circular economic supply chain having received the benefit for a quarter of a century.

Rather than squeeze the last commercial value from UK treasury, the owners should be supporting the international growth opportunity that Scotland’s oil and gas decommissioning policy has sought for the past ten years or so.

Atlas Decom have invested heavily in the site to enable the company to satisfy the rigorous requirements of the UK and Scottish Environmental enforcement authorities, as well as the Health and Safety Executive.

The arrival of the vessel to Inchgreen Marine would immediately create 60 well-paid long-term site positions that would be filled from the local area, with a further 30 positions following shortly thereafter. There would also be a positive impact on the local supply chain with the impact of the local project spend.

The organisation was primed to receive its first end of life container ship at the end of 2021, when the market for ship-based freight transport exploded, due to recovery from Covid depressed economic conditions and the invasion of Ukraine. Container ships that were economically at the end of their life suddenly had increased longevity and value due to the economic conditions suddenly prevailing.

Michael Dixon, Managing Director at Atlas Decom, commented: “The relocation of the Foinaven FPSO and other projects to Inchgreen opens a wealth of possibilities for the Scottish decommissioning industry, driving new opportunities for Strathclyde and the wider Scottish community.”

“This is a real chance to put the Inchgreen Dry Dock, credited as gold standard by Greenpeace, on the international decommissioning stage and establish the Scottish facility as a safe and sustainable location of choice for UK based projects and vessels.”

“It is critical that the entire UK decommissioning supply chain is afforded the support to be able to continue its offering for the future and that support must be actioned now or the supply chain will simply cease to exist. Legislators, regulators, and operators have a huge part to play in shaping how that looks and we intend on being at the forefront of those conversations.”